You are here Home » Eye laser-LASIK » All about eye

The most important sense organ

The most important sense organThe function of the eye is to perceive visual stimuli and to transfer it to our brain.

A healthy and good sight is based on clear images created on the retina.

The optical system of the eye is consisted of a cornea, lenses and vitreous directing the light beams we perceive as picture towards a direct focal point on the retina. This is usually the yellow spot and this directing is called refraction.

The light we perceive and spread by the objects first reaches the transparent surface on the eye called cornea; then the light is refracted by the lenses and it is focused on the retina in inner eye.

There, the light is perceived by the nerves inside the retina and it is transferred to the center of perception in the brain over the visual nerves. Here, these signals are converted into images.

As a result, total refraction force of the lenses called dioptre (dpt) occurs from the various parts of the optical system of the eye.

When an emmetropic eye looks at a distance, light beams are connected on an accurate and clean image on the colour layer of the retina. This image scanned by our retina, consisted of innumerable spot sensor cells, is actually upside down, that is similar to a photo taken by a camera.  Our brain processes the visual data received from both eyes and thus transforms it into a single and harmonies view of the image. 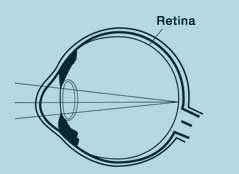 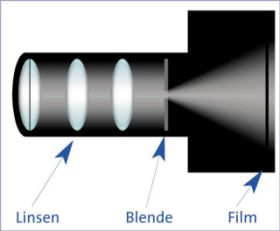 When the focal point is not completely on the retina; that is, when is behind or in front of the retina, the vision is blurred. This is called ametropia, or refractive defiency as publicly known.
In Central Europe, between 15 and 20 per cent of the population suffers from myopia and 5 per cent suffers from hypermetropia.

Myopia (disability to look at a distance =near sightedness)

You can clearly see the objects that are close to you, but the objects at a distance are blurred.

Contrary to the spherical shape of a normal eye, your eye grows bigger in length; resulting in that the focal point of light reflected are not exactly on the retina but in front of the retina.

In that case, the correction value regarding the refraction force deficiency of your eye is showed via minus dioptre values.

When myopia increases, so do the minus values and the thickness of your eyeglasses.

In order to have a better and clearer vision, focal point has to be behind the retina. Correction via laser balancing method is obtained by means of decreasing the refractive force of cornea. 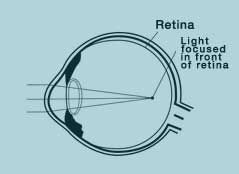 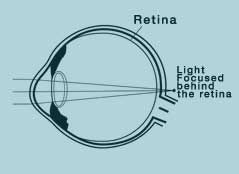 In hypertropia, the patient’s eye grows less than it is supposed to and thus the light beams come together behind the retina.

Therefore people suffering from hypermetropia can actually see distant objects very clearly upto a certain age. However, in case of excessive hypermetropia, the use of eyeglasses is suggested even at young ages. Otherwise, the ability to read starts decreasing at an early age; that is to say, presbyopia appears earlier than it is supposed to.

Laser correction is applied in order to increase the refraction force of the optical system. In hypermetropic patients, eye slightly grows and light beams are collected behind the retina.

Your vision is distorted when looking objects at a distance and objects that are close.

A natural spot looks like a line in your perception.

The reason is that the cornea layer has an elliptic egg like shape instead of a sphere. Here, the light beams are not collected on a single spot by being refracted differently; instead, they spread all over the retina.

Astigmatism is usually seen with myopia or hypermetropia and its correction value is shown in dioptres.

These are especially significant for patients suffering from myopia.

For instance, a person who has -2 or -3 dioptric myopia is always in need of eyeglasses in order to look at a distance clearly. In old age, this use of eyeglasses is necessary. However, it can be removed while reading and thus the person can actually read without the need of any visual aid.

Low myopia makes it possible to read without eyeglasses in old age. However, a correction is still necessary to look at distance while driving or watching TV, etc. As we grow old, our eye lens has difficulty in focusing on different distances automatically.

On condition that the myopia is balanced with a surgical interference, it becomes possible to look at a distance without the need of eye-glasses. As we grow old, for instance as of age 45, presbyopia, sight deficiency brought by old age appears as it does for anyone; and that makes wearing eyeglasses to read obligatory.

It is not completely possible to fix presbyopia with a surgical interference, yet.

However, researches started to define some promising approaches (such as Supracor)

What sort of eye deficiency?

Your eye prescription will tell you whether you have myopia, hypermetropia or astigmatism and how much sight deficiency you have. 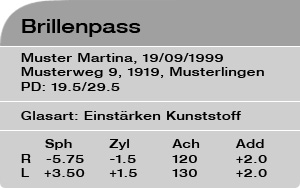 Zyl (cylinder):  It shows the value of astigmatism in dioptre unit; such as 1.5 dpt. It does not matter whether it has a plus or a minus value.

Ach (Axis): Axial position of the astigmatism is shown via a degree. In our sample, astigmat has a 120 degree in a single eye.

Add (Addition): It shows the presbyopia value at the beginning. The value of +2 dpt is added closer for spherical correction..